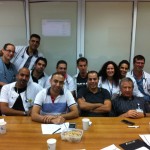 during these difficult times…

As horrific acts of inhumanity flood the world’s media and politicians on every side of every conflict jostle to boost their ratings, there is one small place – an island of sanity in a world gone mad – where Jews and Arabs work together for the well-being of mankind.  Emek Medical Center is a beacon of light in the dark descending upon us all.

This email is not about who is right or wrong … it is about Jews and Arabs who understand the power and importance of mutual respect (despite the conflict) and the mortal vulnerability of us all.  These men and women stand between life and death for the injured and afflicted, regardless of one’s religion or race.  Differences of opinion, whether cultural or political may always be discussed later, and often are, over a cup of coffee.   It’s not about agreeing, but about listening.   during these difficult time

This is about respect and value for human life.  The Emek Jewish and Arab physicians and staff (Muslim, Christian, Druze, Bedouin, Circassian) are committed to saving and not ending lives.  They are the true heroes of humanity who prove hourly and far from the media’s fickle spotlight that Jews and Arabs are capable of caring for one another.  Look at the faces of these people who represent only a small percentage of our multi-ethnic staff of 2,200.  These are faces of sanity and hope.