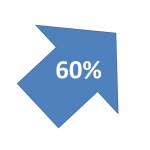 Dramatic Increase in Number of PEF Charities in 2014

There was a dramatic increase in the number of newly registered Israeli charities listed with P.E.F. Israel Endowment Funds in the past year.  In the prior year there were 81 amutot which successfully applied and were approved to receive donor advised grants from PEF.  In 2014 this number went up by over 60% to 132 new charities.

Once approved, an amutah does not appear on the PEF web site with its own web page until it receives contributions, but interested donors can always check the Newly Registered Charities List to confirm that a charity is listed.  For a list of the 132 charities newly listed in 2014 click here.

Geoffrey Stern, President of PEF commented that “This uptick in successful applications represents an acknowledgment by Israeli charities and their donors that PEF plays a unique role in Israel philanthropy.”